A Guide for Amateurs: Blockchain Technology

How is the above e-transaction unique from other non-cash transactions?

Wait, what does all this mean?

These ‘buzz-words’ have seeped into our daily conversation; however, they are widely misunderstood and often confused to be similar concepts.

This piece attempts to provide a brief introduction to the concept of ‘blockchain’ and learn about its uses and applications.

Simply put, blockchain is one form of ‘distributed ledger’ - a record (i.e. ledger) which is distributed (i.e. it is decentralized and is not regulated by a single entity). On a distributed ledger, any transaction or data entered is confirmed by other entities on that network, and thus recorded.

Blockchain is unique in the fact that the data exchanged over it is stored in blocks which are linked to each other. It is continuously growing as it does not delete old data – it simply adds another block containing the new verified data. These blocks are connected with cryptography. Data over a blockchain cannot be tampered with or changed.

In the illustration shown, Person A could transfer value to Person B over blockchain without needing a bank or any other intermediary; instead, the role of the intermediary (verifying and recording the transaction) was ‘distributed’ amongst other entities on that network, making the transaction transparent and efficient.

Since there is no intermediary/authority – transparency and efficiency created due to the underlying blockchain technology has made blockchain attractive and malleable to almost any scenario where multiple participants who may not know/trust each other are required to share data in order to perform a certain function.

Then, what is Bitcoin?

Bitcoin, a cryptocurrency, is just one of the many applications of the blockchain technology. Then why is the term Bitcoin commonly used alongside the term blockchain, and is, more often than not, conceptually confused?

The answer to this allows us to briefly delve into the history of blockchain.

Cryptocurrency was officially introduced in 2008 by an anonymous entity/entities calling himself/herself/themselves Satoshi Nakamoto in a paper titled ‘Bitcoin: A Peer-to-Peer Electronic Cash System’ which spoke about electronic (non-physical) cash transactions without resorting to a financial institution. The paper explained an underlying technology for making cryptocurrency transactions, which is now known as blockchain.

To what else can blockchain technology be applied?

The chart below shows some useful applications of blockchain, with real-life examples of companies that have implemented them. 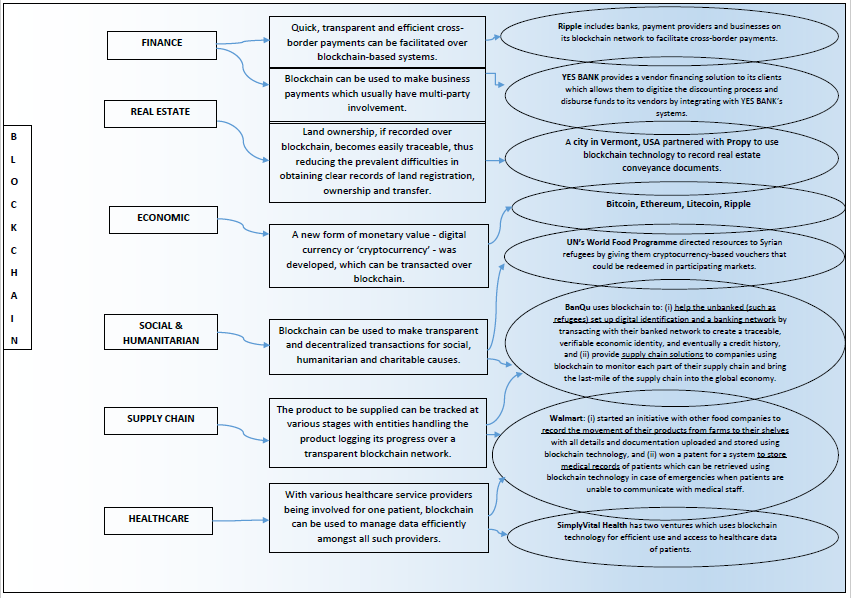 Indian view towards blockchain and cryptocurrency – conservative yet evolving

Simultaneously, the RBI is also investing in research and exploring the potential of blockchain technology as a part of the Indian financial framework. In January 2017, RBI’s research arm - the Institute for Development and Research in Banking Technology (IDRBT) - published a white paper titled ‘Applications of Blockchain Technology to Banking and Financial Sector in India’. Later that year in September, IDRBT announced that they were working on a model blockchain platform on which various applications can be built. Similarly, NITI Aayog, the Indian government’s think tank, is also working on a national strategy for blockchain applications which can be implemented in India.

Conclusion: Blockchain & Cryptocurrency – An interesting segment to follow in the coming years

Blockchain technology has a variety of applications, many of which are being explored by Indian authorities as well as several governments such as South Korea and Dubai. India’s dubious outlook towards virtual currencies is shared by many; however, there are several countries and organisations that are embracing it.

Though cryptocurrency and blockchain technology have been around for many years, their innovative applications and ever-growing uses are still being explored, tested, exploited and implemented throughout the world.

NOTE: This article is intended as a primer for those who wish to read more about blockchain. It does not delve into technical aspects of blockchain, and other sub-concepts such as types of blockchain, smart contracts, etc.